The Voice In My Head

Going into the bottom of the 9th we were up 3-0. The voice in my head said to me, ” The shadow is brutal, I hope they don’t hit the ball to me, you have no chance of making the play!”

In the playoffs, Yankee Stadium can be the most intimidating place on earth.  This is because the crowd takes it to a different level when they sense the Yankees could do something.

This is the first year we play the Yankees in the playoffs and talk about a circus before the game. There are media all over the place.

“Maybe this is why everybody says Yankee stadium is so intimidating in the playoffs…….. I have never seen so much media in one place together?” the voice says

When we were taking batting practice, we had to weave our way through the media to get to the “turtle”(see below) 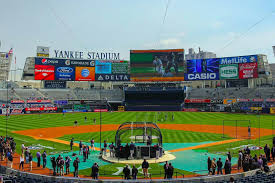 (The turtle is the shell looking thing in the middle, imagine to the left of the turtle full of reporters and cameramen loitering)

Going into the game, I tell myself “No biggie,  Base paths are still 90 feet away. The mound is 60 feet 6 inches. Why do people talk about Yankee Stadium being such a factor?” The voice responds, “Don’t forget this is Yankee Stadium and you are playing the Yankees. Remember last year…………..”

Last year….. We played against the A’s and the first 3 innings were a DISASTER!

But we were more seasoned and we learned a valuable lesson the year before, we came ready to play. Unlike the year before I had a lot more peace going into this playoff series, I was excited to be back in the playoffs.

We opened up the scoring in the top of the 3rd when Rivas hit a sac fly to score Guzy. We score two more runs when Torii hit a triple down the line to drive in Lecroy(this is the only way to score Matty because of his speed. HAHA) and then Tori scored because of a throwing error.

This is the score until the bottom of the 9th,

and the Yankee fans are starting to stir.

Our closer Eddie Guardado was in the game to shut down the Yankees.  The thing that you need to understand about this situation is that Eddie is not your typical closer. He didn’t throw 96-99 MPH. Eddy threw 88 MPH and wasn’t afraid to challenge anybody (He really threw harder, 91-93 Mph. I’m just saying that to mess with him). Eddie beat you with heart and grit. He would challenge every hitter.  He was awesome to play behind but…………. It meant that the switch hitters would bat right-handed, and I would have balls hit HARD at me!

Batter 1- All-star Bernie Williams swung at the first pitch … base hit to right.

There is a saying “stay off the tracks when the train is coming through.” Why….. because nothing can stop a train and you are going to get run over. Well, the train is now on the tracks, and it is starting to move.

I could feel the excitement in the air.

Hideki Matsui (also know as Godzilla) was up next. He swung at the first pitch and flew out to left field.

“2 pitches, one out, runner on first, and up by 3. We are still good!” the voice tells me.“But what about the shadow? If a ball is hit to you, you are going to miss it!”

Next batter Aaron Boone hits a double down the left field line.

Yankee stadium erupts!  I could feel the energy in the stadium. (I have chills writing this, I wish everybody reading this could experience a moment like this.  This is extremely exciting to play in)

“Runners on 2nd and 3rd, one out, winning run is at the plate. One swing of the bat and the game is over,”  The voice tells me as I look at the scoreboard. “You are going to lose the ball in the shadow and cost your team the game!”

It is now I started to realize the severity of the situation we are in.  ONE SWING OF THE BAT AND THE GAME IS OVER!  There is a reason they call them the Bronx Bombers.  All nine players can hit is out of the ballpark.

I look at the big screen to see who is up next — Ruben Sierra, Alfonso Soriano, Nick Johnson and then Derek Jeter.

“Oh boy, this sucks! Sierra and Soriano are pull-hitters and hit missiles my way……..If they get Jeter up, we are done.” The voice tells me

This is where the VOICE can get LOUD and negative thoughts can fuel insecurities. On top of that, when the sun is setting at Yankee Stadium and goes behind the grandstand, it becomes very difficult to see the ball off the bat.  When a ball is hit, it goes from shadow to sunlight before it gets to the infield dirt.

“What if they hit me the ball to me and I miss it? What if I am the guy that screws this up for Eddie…… our team…..? Don’t screw this up. You can’t make this play the shadows are too bad” The voice got loud!

“I can’t ruminate on what I can’t do and the what ifs,  I need to be ready for a ground ball,” Another voice tells me.

“OK, one out away from game over, who’s up?” The voice asked me

OH BOY!!!!!!………. Soriano had an uppercut swing and hit some very tough balls that would eat up 3rd basemen across the league.

The voice told me, ” If they get Jeter up the game is going to change. We got to get Johnson. At least he is not a righty, and he is not going to hit the ball to me, BUT WHAT IF HE DOES?”

Nick Johnson is batting 9th and is a left-handed hitter.

Strike one……. The voice tells me, “The shadow”

Sure enough with two strikes, Nick Johnson hits a ball off the end of the bat to me.

I froze for a second, trying to find the ball in the shadow.  All of a sudden I heard my voice YELLING. “GO FOR IT.”

So I started to charge. The ball coming at me was in and out light,it was an extremely difficult read.

“I have to get this ball in the light, or I am screwed,” the voice panicked.

“Argh, I can’t see it. Do I slow down to get it in the light? If I do that, he might have a chance to beat it out. What do I do? the voice is confused.

“SCREW IT… GO FOR IT,” The voice SCREAMED.

There is something special about catching the ball in the right part of the glove, and it sticks in there.  WHAT A FEELING!

I threw the ball to first.

The voice is everywhere.  It was with me before that moment, and it is still with me today.  Sometimes it is encouraging, but most of the times it is Negative Nellie telling me how much of a failure I am. I have a choice to listen to the voice or introduce a new voice that is encouraging and uplifting.  Everybody deals with the voice of self-doubt and what-if…….It is alive and present in all of our relationships and all that we do. What has helped me deal with the voice is a quote. “Finally, brothers and sisters, whatever is true, whatever is noble, whatever is right, whatever is pure, whatever is lovely, whatever is admirable—if anything is excellent or praiseworthy—think about such things.” Philippians 4:8  If fill my mind with productive self-talk. This way there is no room for Negative Nellie.  But as soon as I let my guard down guess who shows up!

How I apply what I learned to my business

The voice was SCREAMING AT ME when I started my first business and is with me with Linklete. “You don’t know what you are doing. You don’t know how to write.  People are going to laugh at you. You suck at podcasts. Nobody will read your stuff. You don’t know how to market.”  This all may be true, and I have to be okay with that. What I tell that voice. “You told me that when I was in the major leagues and I did pretty good. Yes, I did suck at times, but I got better. I had a pretty good career.  You told me that when I opened my Planet Fitness and yes I did suck at the beginning but I did get better, and I had a lot of success later on. Yes, I may suck at what I do right now but I will get better.”

How I apply it to Youth Sports

The voice screams at me here, too. And so do the parents………. I am way out there in my style of coaching.  I am the anti-coach.  I trust the kids to figure it out, and I encourage them on their journey. I try to coach to make myself irrelevant.  This is the kids game, not mine.  This is so different for a lot of parents that I have been called a lot of names over the course of coaching 95 teams. “Aloof, disengaged, arrogant” are a couple. The voice tells me to “micromanage, tell the kids what they are doing wrong, be more assertive, yell at them they are not listening to you, how are they going to get better if you don’t tell them what they are doing wrong?”  I have to tell the voice “it is about character development and not skill development.  I am coaching life and not a win in a game. I have a history of impacting kids lives and will continue to stay to course because I know this is the best thing for the kids. TRUST, ENCOURAGE, AND INSPIRE”