Believe You Are The Best 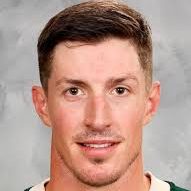 Growing up in St. Paul, Minn., I played all sports, purposely, because when the season changed, my game changed. My dad was my football coach for most of my younger years. He was a former football player, and he loved the sport. He was an amazing coach, especially when it came to the mental game. He always told me I had something special, and I believed him. He called it a superpower. “When you have it, you need to turn it on,” he would say. I always believed in my head that I was good at whatever I was doing. And, because I believed it, it came true.

I loved to play football, but I loved hockey even more. In high school, I wanted to play both football and hockey, but the decision to favor one over the other was made for me. Something I’m still mad about. I showed up for football tryouts, and I was upfront with the coach right from the start.

I said, “I have to play hockey in addition to football. Football will be my precedence, but I will be playing hockey, too.”

The coach’s response was, “No. You can’t play both.”

In 10th and 11th grade hockey, it was a time to get recognized by colleges and a chance to become a prospect. I needed to show a level of commitment to hockey at that time in order to see what my future held. So, I quit football right then and there, per that conversation with the football coach.

Going home to tell my dad was one of the hardest conversations. Football was what my dad knew, it was what he understood. He didn’t know hockey. I told my dad what happened, and that I needed to make this choice. He handled it OK. He wasn’t upset with me. He was more ticked at the coach. The fact that somebody else took it away from me was tough to swallow. “If you are committed to this, then this is what you are doing,” he said.

So, I played hockey for White Bear Lake High School starting in 10th grade. I was very fortunate throughout my high school career. I must have made a decent name for myself because I was up for Mr. Hockey, which is a big deal in Minnesota. And, I was able to sign a tender for the United States Hockey League (USHL).

The USHL was great! The hockey was a little bit better than high school, but that experience taught me a lot about life. When I packed my car and moved to Green Bay to play, I learned to be on my own. I never went back home. I grew up really fast in a short period of time. I spent two years there before I went to Mankato State to play hockey in college. Being a freshman was intimidating. I had my tail between my legs. But, my mentality was that I was going to be the best player on this team. I believed I could do it. That season got me on the NHL radar.

The NHL wasn’t something I thought about. For whatever reason, I believed everyone who said, “You should just focus on school. You will not play professionally. The numbers are so small, so your chances of making it are so small.”So, really, I was surprised there was interest in me. I ended up being in contact with a couple of teams, and I ultimately signed with Anaheim. I actually didn’t want to leave school—coming back to the advice from others where I needed to focus on education, rather than the pros. But, a bunch of my Mankato State teammates left that year, and I felt I needed to give the pros a shot. Before playing with the big club, I went to the American Hockey League.

I played one year in the American League. By the end of the season, we didn’t make the playoffs or have a ton of success. But, the big club was doing well, and I was doing well. Anaheim was in the playoffs. The club brought up some prospects during playoff season, and I was luckily one of those guys. We got to practice away from the team, but still got a good view of what it was like to play in the NHL and the playoffs. Next thing I knew, there was an injury, and the Ducks needed me to practice. I was happy to fill that hold, but after six weeks of practicing, I was kind of ready to go home. That’s when I got the call.

“Ryan, you are playing tomorrow.”

My first career game was against the Detroit Red Wings in the Western Conference Final. I was nervous, and I didn’t play a ton. We defeated the Ottawa Senators to win Stanley Cup that year, 2007.

In 2010, I was traded to Carolina, then to Florida and then I was claimed on waivers to New Jersey. I actually ended up turning down the biggest, two-year contract in my career while I was at New Jersey. Once I got a taste of winning, I wanted to keep it going. I wanted to win. And, I didn’t feel like the Devils were going to win. Also, I wasn’t sure what would happen with the coach there. I just had a feeling that if things didn’t go well from the beginning, then he would be gone. So, I turned down the deal and ended up sitting with nothing. I went to the Devils training camp on a professional try-out contract. I played one exhibition game there, and then I got a call from the Minnesota Wild.

I remember thinking, “I can’t be too emotional about this. I have to think about it.”

I played with the Wild for two years. It’s a boy’s dream to play for the big club in his hometown. I got to play in my hometown and share it with my kids. I checked two things off my bucket list. It was such a special experience, and I couldn’t be more grateful to have those memories, for me and my family.

What did I learn?

I’m not perfect, and I’m not good all the time. There are going to be opportunities for people to tell me, I’m not good. How am I going to respond to that? It’s always about the response. I came back to what I am good at, which is competing. Anything I am doing, I want to do it more.