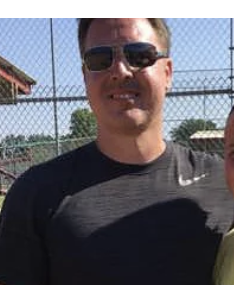 Founder of Jerrad Hardin Fastpitch, he operates a series of national camps and clinics each summer helping prep athletes develop skills and connect with college coaches. Hardin has spent more than two decades working in baseball and softball, starting his career as a high school coach where he was named the NCA Coach of the Year after establishing his program as a perennial state tournament participant and winning a second straight state championship. Later, Hardin penned a best-selling instructional book, opened three training facilities where he helped develop the careers of numerous college and pro athletes, Today, Hardin continues to operate his camp business and writes from his home in Northwest Arkansas, he shares with his wife, Julia, and three young children.

Bobby Miller stood anxiously in the on-deck circle. Though he was just a first-year player in the league, after a full summer of games, he was no stranger to pressure.

But on this night, there was an unfamiliar intensity in the air.

With the sacks full and one out, Bobby cringed when  Ryan Johnson flailed at a pitch in the dirt for strike three.

If his team were to win the Clark County League Championship, it would be up to him. Down by a single run, a hit would surely win the game.

There was an opportunity to be the hero, but that’s not where his mind went.  Instead, Bobby’s knees wobbled and a heavy pit began to form and tumble in his stomach. Sadly, he envisioned failing and letting everyone down.

As Bobby tried to walk fast to the plate, his feet didn’t want to move. Suddenly, the bat felt heavy in his hands and each breath became more and more elusive. Sweat spilled from his forehead, stinging his eyes. He thought he might faint but was instantly relieved when the opposing coach darted onto the field, calling a timeout for a quick chat with his team.

In that moment of reprieve, Bobby could hear his mom and dad shouting from the bleachers.

“You can do it!” Bobby’s mother cupped her hands and sounded confident but her tense expression told a different story.

Bobby’s father invoked strategy while swaying his upper body nervously back and forth from the edge of his seat. “Swing at the first pitch, Bobby – been a strike all night!”

Other parents from Bobby’s team directed words of encouragement in-between exchanging terse words with parents from the opposing team, who were shouting to the pitcher and offering advice of their own to the coach who gathered his team’s defense around the mound.

Bobby nearly jumped out of his shoes when his coach knelt beside him and swiveled to look him in the eyes.

“Hey kid, just like we’ve been doing it all year. No pressure here.”

The coach extended an arm and placed a grip on the ten-year old’s shoulder.

Bobby’s eyes wandered to the crowd where the emotion of the moment was causing an argument between parents sitting left of Homeplate with those on the right.

“Block all that out,” the coach said.  “You got this.” The coach squeezed the young boy’s shoulder, stood, and walked back to his box.

The coach seemed confident, but the more time Bobby had to think about it, the less confident he felt.

Bobby attempted to take a practice swing as he waited for the action to resume but the motion made him light-headed.

Some in the crowd noticed as Bobby stumbled and failed to gain his balance. The rest joined in and gasped when the boy fell to the ground.

Bobby lay motionless. His coach sprinted the short distance and dropped to his side.  It was immediately clear; the boy had stopped breathing.

“9-1-1!” the coach shouted and wasted no time administering CPR.

Several others quickly formed a circle around the coach and boy.

Bobby’s parents hurried onto the field in a panic. Thankfully, by the time they had reached him, the coach had found a pulse and Bobby appeared to be breathing once again.

Parents from both sides sat in prayer and stood in anguish at the horrid scene. At the same time, the opposing team vacated the field with their coach shielding their view.

After a few uncertain moments, Bobby opened his eyes and immediately, those around him helped him sit up.

Bobby’s eyes were wide with fright, momentarily unaware of his surroundings.

The young boy’s mother with tear-filled eyes wrapped her arms around her son and thanked God.

The father stood at their side and reached down, rubbing the boy’s back.

As things started to settle a bit, the umpire casually strolled next to the group and asked the coach about the next move.

“Coach, who do you want to hit for this boy?”

The coach looked back to the dugout and it dawned on him that they had used their last reserve to pinch hit in the previous inning.

With a strained look on his face, the coach informed the umpire of the situation.

The umpire seemed to wrestle with a decision.

“I’m sorry, but without a hitter, you’ll have to forfeit.”

Bobby’s father overheard the conversation and stepped in.

Bobby’s mother protested, “Charles, you can’t be serious!” She cradled her son in her arms. “He needs to go to the hospital and get checked.”

Charles Miller shook his head, disagreeing with his wife. He knelt face-to-face with his son.

“Bobby, you okay to hit? The team needs you. If you don’t do this, the team will have to forfeit.”

Bobby, still a little dazed by the happenings, attempted a nod.

Charles stood and stated. “He’s fine – give him a minute.”

Most of the parents in the stands had become aware of the situation and while those on Bobby’s side were cheering him on – those on the other were jeering Charles Miller.

This infuriated the young boy’s father, who stepped to the crowd and pointed a finger through the fence barking back, hurling insults of his own. Soon, others chimed in, and an all-out fight ensued. Parents yelled obscenities in both directions, grabbed haplessly at their counterparts, and even a few untrained fists were drawn.

Fortunately, the police had arrived ahead of the medics from the 9-1-1 call and were able to wedge between the warring parties and bring some level of semblance back to the scene.

Meanwhile, Bobby, sitting on his haunches, began to feel the overwhelming pressure to take the at-bat.

He stood with the help of his mother and those around him. When he got to his feet, he lied and told everyone he was fine.

The umpire looked to the coach, who looked to Bobby’s mother.

“Just let him play,” Bobby’s father pleaded to the mother.

Reluctantly, and knowing better, the mother nodded with permission and walked off the field.

Half the crowd erupted with applause.

The coach put his arm around Bobby and whispered past the earhole in the helmet.

Bobby didn’t voice a response, instead slipped away from the coach and headed to the plate.

The young boy’s body shook from the ordeal and each breath seemed harder than the last to catch.

On the first pitch, Bobby swung, as his dad had instructed, and connected, sending the ball between two fielders on the right side.

In response, the crowd erupted in jubilation, as the tying and winning runs advanced toward home.  Bobby dropped the bat and moved his heavy feet from the batter’s box toward first base.

Half-way down the line, Bobby collapsed.

While the crowd was celebrating when the winning run crossed the plate, coaches on both sides rushed to Bobby’s side.

The losing team hung their heads as their parents cussed and moaned about the game’s outcome, while the winning team’s parents and fans danced and hugged in the stands. Few realized that the young boy who had sent the ball into the gap was now face down in the dirt.

The medics, having already been summoned, were on the scene at once.

One of the first responders angrily asked the group surrounding the fallen boy. “Is this the boy we were called about? Why was he still playing?”

But he received no answer, only blank stares.

Bobby was placed on a backboard and rushed to the back of the ambulance. Charles Miller tried to console his wife but she refused.

“This is your fault,” she screamed and aggressively pushed him away. “I’ll never forgive you!”

Charles Miller stood at a podium, without a ring on his left hand, in front of a packed house at the opening ceremonies for the Johnsonville Little League.

His opening line trembled from his lips as it had the many times he had done this over the past year.

“Two years ago, my son Bobby Miller collapsed on the field and died from an undiagnosed heart condition.”

The crowd expressed shock and the room fell completely silent.

“I’m here tonight to share my story so that you might be able to create a better environment for your children.”

“Losing my son made me realize how the adults in his life had failed him.”

“Losing him also put competition into a different perspective.

“Living without him has opened my eyes to how outrageous the adults in our league acted toward their children.”

“We all made the mistake of making the competition unhealthy. We burdened our children with heavy expectations, created unnecessary anxiety for them, and demonstrated poor sportsmanship as parents and spectators.”

Charles wiped at the tears forming in his eyes and attempted to soothe his voice with a drink of water. The room remained silent.

“…Your league can be different.”

“Adopt and abide by these simple rules.”

“Model for Your Child.”

“Respect the Game – Care for it – Leave it better than when you found it.”

“We may not always agree with coaches or umpires. It’s also natural to have feelings about wins and losses, failures and accomplishments – but never lose sight of the most important thing – your child.”

“When you abide by the rules I’ve suggested, your children benefit. Their experiences are enriched. Their time becomes more enjoyable. They’ll end up better teammates – better ballplayers – and someday, a healthier cycle will form and they can all be better parents.”