Farm Livin’: Never Forget Where You Came From 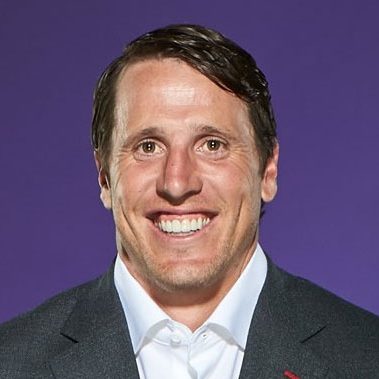 Former NFL linebacker who spent his entire 11-year career with the Minnesota Vikings of the National Football League. He played college football at Iowa, and was drafted by the Vikings in the first round of the 2006 NFL Draft. In 2008, Greenway established his charitable foundation, Chad Greenway’s Lead The Way Foundation, with the primary focus of providing seriously ill and physically challenged children throughout the Twin Cities with daily support and life-changing experiences. The mission of Chad Greenway’s Lead The Way Foundation is to enrich the lives of individuals and families in need.

For us, it was the best, living on a farm. My parents were high school sweethearts, who started the farm when they were 18 years old. They had all three of us, my two sisters and me, by the time they were 24 years old. It was a family affair out there. We had cattle, pigs, corn, soybeans and wheat; we farmed about 2,000 acres. There was always work to do. What I did on the farm as an 8-year-old boy truly mattered to how we functioned as a family. Could we put food on the table? Could we continue to farm? Could we feed the animals? There was a sense of responsibility within me from the beginning. It’s different with my kids now. If they don’t wash the dishes or mow the lawn, we can still function.

My family learned a lot about each other day in and day out on the farm. It was especially interesting watching my parents interact, a married couple who worked together. They would get emotional and get into arguments, but at the end of the day, they loved each other. The minute their heads hit the pillow, they were a happily married couple rather than disagreeing co-workers.

Throughout the day, we would walk rows of beans, cut and pull weeds, spray beans, then have lunch in the field, all as a family. You usually think about the stereotypical Mom preparing lunch and driving it out to the field for everyone. That was not the case at my house. My mom ran the farm just as much as my dad. She still runs the farm, now completely on her own after my dad passed.

My grandmother was the one who would occasionally bring out lunch and spread it out on the truck. All of my extended family lived nearby. It was great spending time with my uncles, grandfather, cousins. That sense of community and family, accomplishing a goal and then moving on to the next.

I think the population of our small town in South Dakota was roughly 400 people. My graduating class was 26 kids. The only sport you could play at five or six years old was baseball. So, that’s what I would play in the summer, nothing during the school year though. In order to get to practice, I had to bike about six miles there on gravel roads. I would usually pick up my cousin, Levi, on the way, since he was only two miles out of town. My parents couldn’t take me, because they were working. They didn’t even have time to stop and go to Sunday services. They would drop my sisters and me off at church, so we could attend. I remember my dad saying, “Pray for me.” There was always something to be done.

As I got older, I played baseball, basketball, football and ran track. I played these all the way through high school. That’s when practices were after school, and my sister could drive us, as they played sports, too. We would leave practice, get home, walk in the door, put down our bags and head outside to finish chores. It was not an option to go home, put your bag down and put your feet up. We wouldn’t eat supper until 9:30-10 p.m., after everything outside was wrapped up. Then, it was bedtime and on to the next day. This was just normal. It was what everyone did.

The next morning, I would usually pop up around 6 a.m. and start loading pigs before I left for school. We had to fill those trailers with about 180 pigs, at 280 pounds each. After working in the confinement barn before school, the smell of ammonia not only stuck on my clothes, but it would seep into my skin. The ongoing joke was that I would take a tube of toothpaste into the shower with me. It helped to take some of the ammonia smell out, especially on the areas that were used more often when loading, like my hands. I’m sure there is a better solution now, but back then, that’s what we used.

As sports became more and more important, and more and more a part of my life, there wasn’t a moment that went by on the farm, doing chores, that I didn’t have a football in my hand or would play basketball on my 20-minute break. My “workouts” consisted of sprinting to grab a tool my dad needed or running through the fields. I didn’t lift weights or “train.” I was out on the farm, and that was the only option available to me. I had such a want to be in sports all the time, that I made it work.

I actually wanted to be a basketball player. In high school, I started getting offers for basketball, but nothing Division 1, which was my goal. I was getting a little interest for football, but it wasn’t until our team won a second State title my senior year that the future looked clear. I went to a Nike football camp in Colorado that year as well, something I had never done before, and did well there. And, then a scholarship offer came in from the University of Iowa. That was it. The offer came through mid-way into my senior year, basketball took a back seat, and my career in football began.

At the father/son football banquet my senior year of high school, my dad, a man of few words, said to me, “Never forget where you came from. Never forget what made you who you are. Never forget the fabric we are from; South Dakota where we are all farmers.” And, you know what, I never did. Growing up where I did, gave me an amazing work ethic. I don’t think I could navigate my life, including my career in sports, without a childhood on the farm.

Be sure to listen to Chad’s Story Sunday night at 6 pm on “How I Got Here” from Linklete  www.anchor.fm/linklete or wherever you listen to podcasts.

You can check out more stories on www.linklete.com or download the Linklete app on the app store, Google Play, or Android