How Baseball Got Me Off the Streets of Jersey City 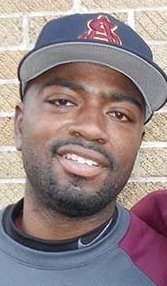 Baseball Director First Move Baseball Club, Coached RBI teams for 11 years. Has won 2 RBI World Series. Drafted by the Cincinnati Red in the 2000 Major League drafted. Did not sign in order to get a college degree. Received his Bachelor’s in Sociology from William Paterson University. He is a board member of the Jackie Robinson Little League.

Growing up in Jersey City, N.J. was hard. I had an older brother who was a basketball star, but he was mentally sick. My little brother was a gang banger, and my mother was into drugs. The question I had to answer was, “Who did I want to be?”

When I was young, to make money and buy food, my brother and I stole and then delivered, newspapers door to door in the neighborhood. One knock changed my life.

A man opened his front door. My older brother, paused, and finally said, “Daddy?” You see, I had never met my father before. That moment was the first time. After that, we ended up moving into my dad’s house. He lived there with his wife, and I think she pushed him to have us stay. They broke up and separated later on.

Before that though, his wife took me down to the ballpark and introduced me to the game of baseball. I had played lot ball, or stickball, before, but never baseball. I actually had my church shoes on as I showed up for tryouts. I walked out to the field, and the coaches hit me a ground ball. Boom! It just clicked. It was an instinct thing for me. Then, they hit me a fly ball. The same instinct kicked in.

After it was all done, they said to me, “You don’t even need to pay, just play.”

So, I played. I probably quit 40 times before that, because I was so into the streets. I was battling being a gangster and being a player. I got left back in 8th grade. I was about to give up and start hanging out with the kids I shouldn’t, but I had one coach who said, “You could be amazing if you don’t give up.”

It took me some time, but I got there. I knew I just didn’t want to be a drug dealer.

High school coaches started coming around, buzzing, about me playing. At that point, I realized I was good. This could be my way out. One Catholic school, St. Mary’s High School in Jersey City, asked me to come there and play baseball. I dominated that freshmen year.

So, I transferred to a bigger school for baseball. A guy named Mike Hogan, who used to coach Willie Banks and John Valentin, bought me my first glove. MY FIRST GLOVE. Up until then, I used everybody else’s gloves. It was a Rawlings, like a $150 to $200 glove, and he gave it to me. He said, “This is yours.” I was shocked.

That same year, he took me to a college in West Virginia to watch a baseball game. And that’s when I knew. I want to do this; no one was going to tell me I couldn’t. God gifted me with the type of mind where I don’t give up. So, I worked hard and gave baseball all I had.

I was drafted in the 30th round in the 2000 Major League Baseball draft. During that time, a lot of things were happening in my life. I was actually disappointed by the draft, because I was mentioned to be in the top 10 rounds, and that didn’t go my way. I had a great year in Alabama, and the hype around me was good. I was looking to be taken earlier and hoping the bonus would be right. I hesitated a little bit.

The draft was June 6, and on June 24 my little brother was killed. I couldn’t believe it. I was heartbroken because a lot of things I had done up to that point was for my brother and my mother. You know, try to help them get out of the situation in Jersey City.

This was a turning point because I just left like I needed to change my family culture. I had to do something different and playing Major League Baseball wasn’t it. I had seen a lot of people go to school and become successful, and I just felt like that was my path.

And then on July 26, my son was born. Another reason to stay. If I went, he wouldn’t have seen me. I didn’t want him to grow up alone, like I did, without a father. It was crazy. So, for me to do that same thing to my kid wasn’t an option.

The decision was made. “I’m going to go back to school.”

My goal was to play baseball, see what happens and finish college. If the draft happened again, and I go at a decent spot, let’s try it. But, I knew I had to commit to getting my degree. And the craziest part, I don’t think I would be here right now if I played Major League baseball.

I started college at Bishop State in Alabama, and then went to William Patterson University where I graduated. I had a kid, and I was a college athlete. Most people would think that combo was hard, but it was actually easy for me. Going to school was fun. I had a dorm, a place to live, which was great compared to Jersey City. God bless I was good at baseball, because the coaches loved me, made sure I had money and that I was doing OK while at school. All of that was easy. Comin from nothing, not eating every day, being on the streets and being evicted, that’s hard.

My senior year of college, I was invited to the Expos spring training to work out and practice. Around that time, too, I found out I had kidney disease.

Should I go? What if I get hurt? What if my kidneys fail?

I’ve never been that guy worrying about injury, but if I went and didn’t succeed, then my family would have nothing. We would be right back to the way I grew up, on the streets. I didn’t want that for my family. So, I said, “No,” and I found a job back home instead.

My first year out of college, I became an assistant baseball coach at a local, public school. After that, I knew I wanted to be a head coach at a school where I could build and move up. Crazy enough, that job was at my old school, Marist High School in Jersey City. The team was 0-23 when I walked in the door. When I told people about the gig, they were like, “You crazy?!”

The following year, Marist made the playoffs for the first time. I had a lot of pride since it was my old school. We got to a point where we were building the program, and we were dominating. The energy was crazy. And, I think what shocked people the most was, we were getting the bad kids to play, the kids they didn’t want. To me, they were easy to work with. It was all about mutual respect. It’s hard when you come home, and there’s no food. I get it. But, if they were acting a fool, I put them in their place. I taught them what was right and wrong. And, you know what? Every one of them became studs.

Since I had proved myself as head coach, Marist offered me a position as gym teacher/baseball coach. I was like, “I got to start working. I need money.” I knew my kidney disease wasn’t getting better. Right now, I’m hooked up to dialysis every night for nine hours.

After seven years, I got the athletic director job at Marist and was there for four to five years. They were paying me real good. It stopped when St. Anthony’s, another local Catholic school, closed because of budgeting in 2017.

I continue to coach through the RBI program, which I have been a part of for 14 years. I travel with the program, which is operated by the Major League Baseball association, telling people my story and introducing them to some incredible young baseball players, who all come from neighborhoods like me. I am lucky. I always have been. It’s like I tell my kids, “When I was young, living on the streets in Jersey City, I would be standing on the blocks, hanging with kids doing crazy things. All of a sudden, I’d say to myself, “Nah, I’m going home.”

Usually, moments after I left, something bad would happen. I am fortunate and blessed to be where I am today.

From Corey Koskie – Linklete-  Ron Hayward has been on the waiting list for a kidney transplant for 5 years.  He is on dialysis for 9 hours a night.  His blood type is O+.  Please contact us at info@linklete.com if you can help Coach Hayward