How It All Came Together 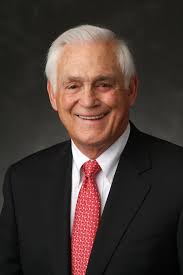 former Minnesota North Stars defenseman and general manager. He is a member of the United States Hockey Hall of Fame and of the International Ice Hockey Federation Hall of Fame. Currently works for the RBC as a Senior Managing Director Institutional Sales

I grew up in an Italian neighborhood in Sault Ste. Marie, and we were consumed by hockey. We didn’t have a television until I was 12 years old, so all we did was go outside and play sports. Even though we consumed with Hockey we played every sport.  After school, we would play street hockey, and then we would go to the rinks when our teams practiced. We had a lot of good athletes, and we were driven to do well. We just had a passion to work very hard.

My father owned an Italian grocery store, and my mom had a clothing store, she would say it was a dry goods store, across the street from him. I helped at the store on the weekends, filling shelves or doing deliveries. They worked six days a week, and even on the seventh day, my father would go to the store to fill shelves or cut meat before church. I actually got married on a Monday, so they could keep the stores open on Saturday.

At 13 years old, I was owned by the Chicago Blackhawks. There wasn’t a draft back then. I continued to play hockey in Canada, even after the Blackhawks owned my rights. I never actually played for them. For six years after that, our hockey team was unbeatable. We had great players. We were driven to do well, and we just had a passion to work very hard. It was fun!

After high school, I wanted to be a dentist, so I needed to go somewhere with a dental school. I ended up going to the University of Minnesota. I ended up changing my major to business while I was there. When I graduated from college, the Blackhawks still owned my rights. I thought we had finally agreed on a contract, but they wouldn’t give it to me until I went to training camp. I wasn’t going to do that, because they could change things once I got there. They owned you. There was no player’s association back then. So, I graduated on a Friday, and I started working on a Monday. My intent was to work for three months and then join the Blackhawks. But they told me you won’t play unless you come to camp. And, that’s when you will get your contract.I sat out the first year and continued working. I also coached the University of Minnesota freshman team and played hockey on the weekends in Rochester, Minn. for $30 per game. This was the early 1960s.

The next year, they agreed to pay me what we had discussed earlier, but I was making a little more selling envelopes, so I always turned them down. They wouldn’t let me negotiate with anyone else or play, so I kept working. Five years passed, and then I turned pro.

During that five years, I did call the coach of the 1964 Olympic Canadian team. They were going to have a camp in September and I wanted to try out. I told him, “I’m not going to play with Chicago. I want to try out for the Canadian Olympic team.”
“Louie, we already have our team set.”
“What? You are just having training camp.”
“I’m going with what I got,” he told me.
Years passed, and then the U.S. came to me and asked me to play on their Olympic team.
“Well, I am Canadian,” I said.

They put a bill through Congress that got me instant citizenship. I became captain of the 1968 U.S. Olympic team. Funny enough, the Canada coach came to me in 1967, right before the 1968 Olympics, and said, “We got a job for you on our team. Don’t go with the U.S.” I said to him, “You remember who I am? You wouldn’t give me a try out in 1963. Now, you want me to move my family and be on your team. I will never play for you.”

That was the same year that the NHL expanded, and Chicago couldn’t keep my rights because of the expansion. I was a free agent. The North Stars signed me right after the Olympics; however, it took me a while to play for them. I started negotiating my contract in June of that expansion year. It went back and forth for quite some time.

The president of the organization had to jump in.“I don’t know what we are going to, this is the last chance,” he said.
“Here’s what we are going to do. I will do a personal service contract for three years,” I said.
“What do you mean by that?” he asked.
I said, “I’m going to give you a deal where you can’t lose. You know I am asking for a lot of money (back in those days). I will play hockey for you either in the majors or in the minors. If I go to the minors, then I get a $10,000 raise. I don’t want to play anywhere else other than Minnesota. Then, in the summers, you can sell my rights to any business you want, and I will work for them. I’ll sell for them.”

And, they did. I sold advertising for a local business, and they paid the North Stars, instead of paying me. I also said, “I will set up a hockey school for you, which you don’t have. I will work it and run it.” It became a successful hockey school for them. “I will make every appearance that the other players won’t take. If they won’t go, I will go for nothing.” I did 50 to 70 of those appearances a year. “When you put all of those things together, you can’t lose,” I said. We agreed on it. I signed the contract three months before I turned 27. And then, I played 10 years with the North Stars.

On February 8, 1978, after a game at Madison Square Garden where we got beat 5-0, I went back to my hotel room and got a call from the president of the organization saying he wanted to see me the next day when I got back. When I met with him, he offered me the general manager and head coaching position for the team. “What do you want me to do? Wave a wand in two months?” I asked. I already had another team talking to me as well as the player’s association about working for them. I was going to retire at the end of the year anyway.

Minnesota then interviewed me and asked me what I wanted. “A two-year contract,” I said. They gave it to me. Three days after I played my last game, I became the coach and general manager of the North Stars.

I went into the locker room and said, “Guys, things have changed, as you all know. Yesterday I was your teammate, and today I am your boss. I really value all of our friendships, but friendships aren’t going to deter me from the job I need to do.”

Shortly after that, I had to trade my roommate.

He agreed to the buy-out.

I did a lot of things I didn’t want to do. But I had to do them to get better. We were able to get some great players in the draft that first year. It took us some time to build, but I remember saying to an announcer during our first game of ’79 season in Montreal. It was on National TV in the U.S., too. They would do interviews between periods, and one announcer asked me, “When do you think you could make the finals?
I said, “Three years.”
Then, he started mocking me. And, you know what? We made the finals three years later. It all came together.

How I Apply What I Learned to Business

First thing is you can’t succeed in sports without working hard, and you can’t succeed in business
without working hard. It doesn’t matter what you do, you need a great work ethic. In sports, you are
going to have failures along the way, and you can give up when something doesn’t go right. In business,
you can give up when hearing a “no,” or it doesn’t seem like things are working for you. In either case, if
you give up, you will fail. But, I kept going throughout it all. I preserved. As a salesman, I believe in what I am doing so much that when I tell somebody to do business with me, I really feel like I am doing them a favor. I believe what I am going to do for them will be good for them. If you believe in yourself, in any sport or business, you have a much better chance of succeeding.

You can read more stories like this on www.linklete.com