We are playing a day game in Anaheim.  This is called “getaway day” because right after the game we are flying to the next city, Detroit. We beat the Angels, and I am 1 for 4 on the day.  I know the stat line doesn’t look that good, but trust me I am banging. I am hitting everything hard, and I am FEELING IT!   After the game, we get on the plane and fly to Detroit. I can’t wait to get to Detroit because Detriot pitching was good hitting.

We have a Monday night game in Detroit. I have a routine in every city we play in and it revolves around food.  Day one in Detroit is Soul Food.  Fried fish, oxtails, red beans, rice, fried chicken, all finished off with peach cobbler.  You might think that is a lot of food, and you are right but Soul food locks me in. As Tony Oliva says, “I maka da ball cry.”  We win, and I am 2 for 4 with a triple off the wall and a hard hit single.   I can’t wait until tomorrow, because I know I am going to get a couple of home runs.  Like I said, I could feel it. There is no doubt in my mind I am going to hit .300 with 30 home runs and 100 RBI’s that year

After flying across the country, I would be a little sore the second day, or maybe it was because of the five pounds of soul food I ate the day before. When we would travel across the country the second day in I would usually book a massage for early in the morning right after breakfast.  This trip was no exception.  I had an 8:30 a.m. appointment.

Then right away the phone rings again

I asked the therapist to grab my phone.

It is my wife.  Now, I was nervous about answering.  She called three times in a row, and she knew I was getting a massage.

I turned on the TV, and what I saw was absolutely horrifying. 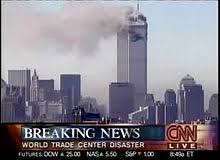 I just couldn’t believe it.  I asked my wife a bunch of questions, but she had no idea what was going on as she just turned on the TV.  The massage therapist leaves, and I was glued to the TV.

Then at 9:03 a.m., I watched in horror as plane two struck the second tower. 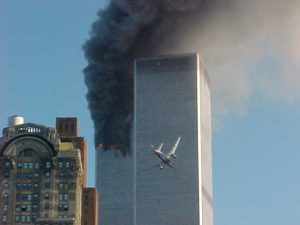 This image will be forever burned in my mind.  I started to panic. “What the heck is going on? How many attacks will there be? Was something going to happen here? What if mass chaos breaks out?”  my mind is racing!  I am stuck in a hotel in Dearborn, Michigan.  So what did I do?  I took a taxi and rented a car because I didn’t know what was going to happen next. My family was 700 miles away.  When I returned to the hotel, I saw guards, it looked like they had automatic weapons, but it was a blur. Nobody knew what was going on, and there was a concern that we were in Dearborn, Michigan.

I went back to my room, turned on the TV and sat there for the rest of the day.

I was overwhelmed with sadness, anger, fear, and anxiety.

The team scheduled a practice for Thursday morning at the stadium, but my heart was just not in it.  It felt good to be outside running around in the cool, crisp fall air.

Major League Baseball decided to cancel the games through the weekend, so the Twins rented a bus to drive us back to Minnesota.   When we finally got home it felt so good to wrap my arms around my family. I couldn’t help but think of all of the families on the morning of September 11th hugging their wive’s, husbands, children for the last time.

I didn’t know how to process all that I was feeling. I didn’t want to play baseball anymore.  Why should I play something that I love, when so many people are hurting? Why should I be happy, when there is so much sadness?

We went back to work and we had a home against the Tigers.  It was a real struggled going back to baseball that day.  Driving to the Metrodome was a surreal experience.  It was like my mind was on cruise control.  I remember leaving the house and the next thing I knew I was parking my car.

As I walked into the Metrodome, there was a level of excitement with the employees.  I was confused by this.  Didn’t they know what happened last week?  How could they be like this?  I walked into the clubhouse. I immediately felt different. I saw Torii, Jacque, Eddy, Latroy, Guzy, And Luis.  Some playing cards, some hanging by their locker.  This felt right, this gave me comfort.  Everything is going to be OK, I thought to myself

The pre-game ceremony was tough.  There was a heaviness to the air, a sadness that was felt by everybody in the stadium. But, when the national anthem was being sung it was different.  There was a feeling of pride, strength, and feeling of we will overcome. When the anthem was over we could feel the anticipation for that first pitch, excitement replaced the heaviness.

The first pitch of the game was at 7:06 p.m. The crowd erupted.  One pitch meant so much. Everything was going to be ok.

My first at-bat of the game, I hit a home run.  That jog around the bases was different.

After the game, I reflected on that moment.

It was at that moment, I realized how important baseball is to our society.

What I Learned as an Athlete

Sports transcend all boundaries.  It doesn’t matter who you are, or what you look like.  If we are wearing the same uniforms, you are connected.

I struggled to process this. Why did a loving God allow this to happen? My short answer is, I don’t know. But what I do know is we were given free will and with that free will and bad stuff will happen. I need to be prepared, and I need to be built on a solid foundation.

Where was God during this time and once again why? I have dealt with sadness, death and tragedy and it hurts. I have screamed out to God. WHY!!?? Anger and sadness have overwhelmed.

We were one Nation under God, indivisible, with liberty and justice for all.

We are all in this together. We need each other to get through this thing called life.