Todd Archbold is the Vice President of Business Development at PrairieCare. He has served as a board member and a consultant to numerous other health organizations in Minnesota, California, and Europe. Todd is a licensed social worker who started his career in 2003 as a coach and school counselor. He has a passion for coaching and leadership in the professional setting, and is the author of Leading with the Head and the Heart (www.headheartleadership.com).

It was easily one of the most vulnerable, humbling and pivotal experiences of my adolescence. A rush of terror, and a gratefulness that would not be realized until at least a decade later.

For years leading up to this moment, I had enjoyed the camaraderie of playing basketball, baseball and football with friends at the park as often as I could. I was a good athlete, but then again, there were a lot of good athletes in my town. When I got to high school, I chose basketball as my main sport and quickly realized that I was one of the millions of high schooler’s who thought they were better than the rest. I was convinced that I was different, that I was the local prodigy who would be recognized for generations to come. When I failed to make the traveling team, and sat on the bench my freshman year of high school, I was devastated. I didn’t even make it through the first season when I quit the team in haste. I was embarrassed, angry and very confused. All of this on top of the pressures facing an awkward, prepubescent freshman in a huge, suburban high school.

After moping around for months, and isolating myself from the basketball circle, my parents urged me to try a different sport. My older brother was on the swim team, but I was never interested in swimming back and forth in a pool all afternoon. I knew a lot of his friends who were on the team, and the assistant coach also happened to be a family friend. Finally, I was convinced to go visit them at practice and learn more. Watching the swimmers go back and forth, back and forth, back and forth in the noisy and humid indoor pool only validated my disinterest; however, I finally looked past the swimmers and saw a handful of guys at the far end of the pool on the diving board. Now that looked kinda fun!

A week later, I was on the diving team, learning the basics of springboard diving–the approach, hurdle and take-off. It was a thrill learning new tricks and flying through the air. I enjoyed learning the techniques that required concentration, core strength and athleticism that was truly a niche. After a few weeks of practice and numerous belly-flops, I had learned how to do a forward dive and an inward dive, enough for the coach to enter me in the exhibition heat at the next competition. On the bus ride to the competition, I reveled in the excitement and intensity the team shared getting ready to face their friendly-competitors. I was truly inspired by this group of boisterous, yet humble, athletes.

When we arrived at the pool, the team headed straight to the locker room to change. The assistant coach let me know that while they did not have a team speedo for me yet, they had what they called a “grab bag suit” for me. Up until this time, I had gone to each practice wearing a regular pair of swim trunks. This was the first time, it occurred to me, that I would have to wear a tiny, skin-tight, spandex SPEEDO! My face turned bright red and the shock of this reality triggered a rush of adrenaline. I was given a few suit options in my size, and in a strange effort to look calm and cool, I jokingly grabbed the most obnoxious suit that I saw–bright purple and orange plaid. What was I thinking!?

I followed the team into the locker room in total shock. While the rest of the team changed and entered the pool for warm up, I paced back and forth staring at the suit. I tried it on, and I took it off. Then, I tried it on again. I had never worn anything like this before, and the look and feel of this suit was completely foreign. I did not even know if I had it on correctly. Outside of that locker room were a hundred friends and strangers. Nearly 30 minutes passed when the coach came and found me, still in shock, and now totally embarrassed. I finally told him that I absolutely could not participate in the competition. I vaguely recall trying to persuade the coach that this was all a mistake, and that I was supposed to be on the basketball team yet somehow ended up at the pool. While I don’t remember what he said to me, I vividly remember a warm and reassuring smile that somehow exuded trust and instilled comfort. Whatever he said, it must have been compelling because the next thing I remember was standing on the pool deck wrapped in the team parka, underneath wearing a tiny, skin-tight, spandex SPEEDO that was purple, orange and plaid.

The diving competition is right after the 50-yard freestyle, so at that time, the divers gathered by the diving board. While all the other divers were warming up, I remained motionless on the pool deck off to the side, still wrapped in the team parka. The moments that followed are ingrained in my mind forever. They called my name, “Todd Archbold performing a 101C forward dive tuck position, degree of difficulty 1.2.” I stood there for what felt like an hour. Finally, under intense pressure, I unzipped my parka and stepped up onto the diving board in front of a hundred people while wearing a tiny, skin-tight, spandex SPEEDO that was purple, orange and plaid. As I looked up in terror from the diving board and into the bleachers, I realized something. I was the only one who seemed to care, or even notice the purple plaid speed. Everybody there was focused in anticipation of my performance. Nobody blinked at the one thing that filled me with fear. Upon realizing this, and feeling my emotions subside, I performed what felt like the most graceful, uplifting and glorious front dive that had ever been done. 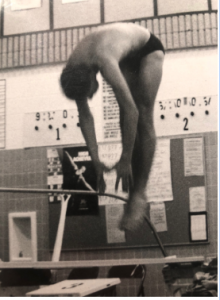 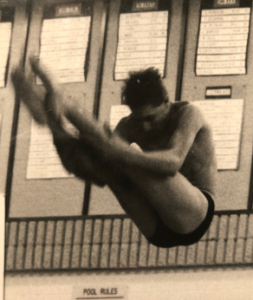 As I emerged from underwater, I was met with roaring applause! I was overwhelmed with amazement and empowerment! My own teammates, coaches, the spectators and even the competing divers were on their feet. While they were likely oblivious of my almost paralyzing terror, they all recognized the courage and hard work that it took to stand there and perform a front dive. In retrospect, I now realize that many of those onlookers likely shared that same feeling of gratification by being a part of my experience, by being supportive during a life-changing moment of a youngster.

This was an absolute defining moment in my life that would shape my athletic career, boost my personal growth and my professional trajectory as a leader. It was the exact lift that my ego and confidence needed, born of a place of utter vulnerability. Over the next decade, I would continue my diving career into college, and then in to coaching. I would eventually coach 11 high school seasons earning “Coach of the Year” honors and having the privilege to shape the diving careers of champions, most of whom were far more talented than me. I eventually picked up other sports such as running and triathlons. Coaching led to teaching, which then led to graduate school. Each new adventure had been inspired by a previous adventure. I learned powerful values along the way, including integrity, discipline and honesty. I also learned not to be afraid to fall down, and then the importance of getting back up again.

Standing there on the diving board in front of all those people, while wearing the purple plaid SPEEDO created a feeling of intense vulnerability, followed by overwhelming trust and empowerment. I am not sure what other context could have safely created that situation for me, but it taught me to face fear, take risks and to trust in others. I am so grateful to our coaches, my teammates and our fans that day. I am encouraged to know that every day other kids, and adults alike, are having similar experiences of vulnerability and trust that will shape their futures for the better. I was never going to be a professional basketball player or an Olympic diver; however, participating in those sports in a safe and supportive atmosphere allowed me to gain experiences that have shaped who I am today, and who I hope to be tomorrow.