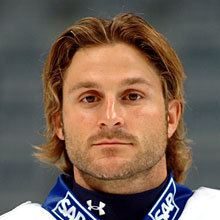 I loved hockey right from the start; however, I was definitely not one of the better players. Truth be told, baseball was probably my most natural sport. I had some easy success with baseball, and I had challenges with hockey. It was a good balance. If you were to ask friends I grew up with if they thought I would play NHL hockey, they would have said, “No.”

I grew up in Morton Grove, IL. There were only two teams in the state that were AAA hockey, or a travel program: Team Illinois and Chicago Young Americans. I was 12 or 13 years old when I played for the Young Americans. And, I got cut. The coach said I wasn’t progressing like I needed to be. It was a turning point in my life. I needed to think about what I wanted to do, and how I was going to get there. I remember having that conversation with my parents. My family was very school-focused. If athletics could lead you to a place where you got a good education, then that was the path. If hockey didn’t work out, then I had the academic piece.

We toured 11 or 12 prep schools in Boston. I ended up going to Tabor Academy in Marion, Mass. It was an unbelievable experience. I spent my sophomore and junior years there. My senior year, I decided to play juniors for the Junior Bruins team. It was shortly after that when I received a phone call from the head hockey coach at the University of Michigan.

He said, “We’ve been watching you for a while. What’s your general feeling on the University of Michigan?”

I told him I would like to visit the campus and see if it was a fit. That conversation happened on a Wednesday.

He said, “I’m not going to waste time bringing you out for an official visit because I’m only allowed so many. But, if the opportunity arises, we would love for you to come out.” That was it. Nothing more.

On Friday morning, the assistant coach called and said, “Can you come out this weekend?”

I explained my earlier conversation with the head coach, but apparently, things changed.

“One guy bowed out of his visit, so you are next on the list.”

So, I went for a visit and signed in October of my senior year. I spent four years Michigan and then graduated. I wasn’t sure what would come next.

During college, I lived in a house with three other hockey players. Those guys ended up being a first-round draft pick and two second-round draft picks. So, over the course of three years, I got to know the agent that represented two of them.

When he came by the house one afternoon to chat with my roommates, he asked me, “Blake, what are you going to do after school?”

“Would you ever think about playing?” he asked.

“Of course! If someone came and gave me the opportunity to play a little bit after college, then sure. I’d love to.”

“Do you have anyone advocating for you to do that?” he wondered.

“Absolutely! But, I don’t have any money to pay you,” I told him.

“Don’t worry about that. Every year, as part of my practice, I like to take a dark horse and do it pro bono, giving him an opportunity to play at the next level. I think you could play for a long time,” he explained.

“Really?” I was shocked.

I left it in his court, and he called me in August of that summer.

“I’ve got an opportunity for you,” he said. “to go try out in Houston.”

“I guess that sounds good,” I answered. “But, what’s the lay of the land down there?”

“They keep seven defensemen on the pro roster. And, they have seven signed right now,” he told me.

“Are there other guys trying out?”

“15 defensemen are trying out.”

“With all due respect, that doesn’t seem like a great opportunity,” I blurted out.

He explained why he thought it was. One reason was the coach, who had a similar coaching style to my coach with the Junior Bruins. And, the second was that I already knew two guys on the team from college.

So, naturally, I followed up with, “What are the other options you have for me? “

“Ok,” I replied. “If I’m going to pursue hockey post-college, then this is what I have to do.”

I moved to Houston in August to try out for the Houston Aeros. I lived in a hotel while I was down there because I had no idea how long I would stay. The coach, Dave Tippett, would check in with me every two weeks, and would then just keep signing me to two-week, try-out contract. I got $350 per week to play, plus the hotel room and free continental breakfast. I didn’t even have a car. I used the hotel van to get back and forth to the rink.

When it came time for my bi-weekly meeting with Tippett in December, I got into his office, thinking this would be as quick as the others.

He said, “Have a seat. You can finally go get an apartment.”

I was stunned and didn’t say anything.

“This is the point where you say, ‘Great,” shake my hand and leave,” Coach said.

“Does that mean I have to move out of the hotel?” That was the only thing that came out. All of these thoughts were rushing through my brain. How am I going to get to the rink? I don’t have a car. I have no money.

Tippett said he would give me an advance so I could put a down payment on a car. I ended up taking the hotel van from the rink, back to the hotel to pack. The driver of the van, who became a buddy of mine throughout the five months I lived in the hotel, asked me what I was going to do. I had no idea. So, he dropped me off at a used car lot with my two bags of stuff. I was the perfect sale for the guys working the lot. A kid coming off of a hotel van with two suitcases. I clearly wasn’t leaving there without a car.

And for two years, I enjoyed life and played hockey in Houston. Little did I know that Coach Tippett and my time in Houston would be a stepping stone for what came next.

I learned that one opportunity, even if it’s not the biggest or most ideal, is still an opportunity worth pursuing. If I didn’t take a chance on my try out with Houston, then who knows where I would be. I had resumés ready to go, hoping I would teach somewhere, so my backup plan was in place. But, I truly loved playing hockey, and I wanted to see where it would take me. Thankfully, I listened and took a leap of faith.