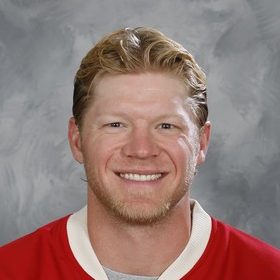 Growing up in Bloomington, Minn., I tried playing every sport I could—baseball, hockey, football, soccer, downhill skiing. If I had a friend that played it, I played. Baseball was my true love, and I played it throughout high school, with other sports as well, hockey being one of them. I didn’t focus on just one sport until college. As I got more and more into hockey—playing on Team Minnesota my freshman year of high school and receiving college letters my sophomore year—I realized that maybe I should focus more of my attention on that than the other sports I played.

My brother was, actually, the first one in our family to play hockey. I always say I feel bad sometimes that I’m the one who played in the NHL because my brother loves the game so much. He could be on the ice year-round, 24/7 and never get tired of it.

The Bloomington Jefferson hockey team was a dynasty. I thought those guys were kings, wearing head to toe baby blue. I was honored to be a part of that group. My freshman year, 1992, the team won the State Championship. I won it with the team in 1993 and 1994. I thought that was the greatest thing I could achieve in hockey. My sophomore year we were 28-0. It was a better team from the year before, if that was possible. Out of 18 guys, 13 got full ride scholarships to D1 schools and 4 guys played in the NHL. We pushed each other. Being surrounded by such great talent makes you humble. I just tried to keep up and live up to a standard that was already in place.

After high school, I had multiple offers to play D1 college hockey. I didn’t grow up a huge Gopher guy. Whenever I watched hockey, it was the North Stars, so I didn’t have the mindset of I HAD to go to the University of Minnesota. I wanted to visit other campuses. Matt Cullen and I actually went on some college trips together, and we both ended up at St. Cloud State. I liked the distance between there and the Twin Cities—close enough that my parents could watch the games, but far enough that there were no surprise visits. The team also graduated 11 seniors, so they had to play Cullen and me whether they liked it or not. We saw it as an opportunity. He and I were together on and off the ice. He was a centerman, a passer, and I was a goal scorer. It was perfect. They had to play us!

The next step was to talk with the NHL scouts. This is when I got an inkling that my hockey career might go farther than college. After two years at St. Cloud, I decided to play in the Western Hockey League (WHL) for the Seattle Thunderbirds. This league operated just like the NHL, which was extremely different than the WCHA, college league. In the Western League, every kid in the locker room has the same goal: to play in the NHL. In reality, not everyone will make it. I do think playing in the Western League saved me a year in the minors. There’s no doubt! I was 21, and I was going to struggle with that style of play against younger kids.

A Stint Out of State

I was drafted by the Colorado Avalanche but was traded before I even played in one game. I didn’t get a phone call or anything. My general manager from Seattle was the one who called me and broke the news.

I paused and replied, “Huh? What?”

“You got traded to Florida.”

My only response was, “Did I?”

Two minutes later, I got a call saying, “You got traded to Florida.”

I played a couple years with the Florida Panthers, and then I got traded to the New York Islanders. I wasn’t happy with this trade. In Florida, I was surrounded by a lot of veterans, great players, who taught me how to be a professional. Those guys brought me everywhere and made sure I could keep up on the ice, as well as off, which was just as important.

In New York, we were on the rise to be the worst team in the league my first year. I realized that the same work ethic wasn’t there. At first, I would stay after practice, shoot pucks and do drills, but I was the only one. Soon, I followed suit and couldn’t wait to get off the ice. My attitude spilled over to the effort. Looking back, it’s one of my biggest regrets. You cannot control where you are, who you are playing with/for, the coach’s decisions, but you can control your attitude and effort.

After my first season, I refocused and reset over the summer. I changed my attitude and effort, so I was ready to work as hard as I could on and off the ice. And, that transformation paid off. My second year with the Islanders, we had one of the best turnarounds in NHL history. I also had a career-high year.

Unfortunately, after that, the lockout happened, and more time was lost; however, what started as a bumpy road, ended on a high note in 2006 when I signed with the Minnesota Wild. It was the best day of my life. I was coming home!

I wanted to be a hometown kid. The support I got, not only from my family but from the people, the fans, was amazing. I was so happy to have my wife and kids as part of it, too. I was looking forward to having my kids play around the hockey room.

I played with the Wild for two seasons, until I got THE phone call. This would be one of the worst days of my life. Jacques Lemaire had told the team he was going to retire. I was excited to get a chance at a clean slate. I wanted to put the last two years behind me and start the upcoming season. I remember sitting on my couch, watching ESPN SportsCenter. All of a sudden, I hear, “Breaking news, Jacques has decided to stay for another year.” My wife, Nikki, was in the kitchen. I looked back at her and said, “Oh, no.” This is when I thought I would get traded.

A couple of days later, my phone rang, and it was the Wild offices. It’s funny, because I saw them on caller ID, looked at Nikki and said, “I think I’m getting bought out.”

I remember being heart-broken. The world just collapsed. There’s a song, “Your darkest hour never comes at night.” That’s true! Signing in Minnesota was one of the greatest days. Two years later, being bought out, was one of my worst. That summer, I was out of it. I backed off on my workouts, my head and heart just weren’t in it. Eventually, I made my way to Dallas, and what happened in Minnesota affected me while I was on the Stars.

Transitioning out of the NHL was an adjustment. It was tough! Being a hockey player was my identity. I had to mourn that loss. It was like losing a friend or family member. I miss it still to this day, but you get to a point where you are tired of being sad about it. I needed to move on. So, I started coaching high school hockey in Orono. Then, 25 years to the day from when I won the State High School Hockey Championship as a sophomore, Orono won the title. I realize, now, how difficult it is to win the tournament, what all goes into it. I didn’t understand that as a player. I just thought I was doing my job at Jefferson. I was so focused on myself. As a coach, I keep everybody on board. I get them to buy in. I won’t lie, I had trouble keeping the tears in—close to Niagara Falls on TV—because I was so proud of those kids.

I know for a fact that it takes a village. Without my wife, my parents, my brother and my friends pushing me, I wouldn’t have been held accountable. They held me accountable on and off the ice. I had a lot of help in staying sharp and staying on top of it.

I also know that a lot of my success, my talent, that kept me in the NHL resulted from hard work. Nothing came easy for me. I never really did anything great, I just did everything well. The work I had to put into just skate and keep up was tremendous.

Check out other stories on www.linklete.com

Be sure to download the Linklete app on the app store, google play, or Android