Why I Was Scared 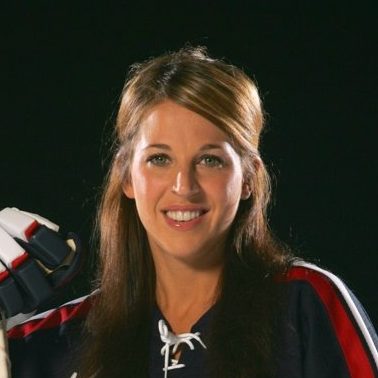 was the first winner of the Minnesota Ms. Hockey Award. Won the Minnesota State tournament in 1996 with Roseville. Won a silver medal at the 2001 IIHF Women's World ice hockey championships. Played for the University of Minnesota Gophers. Currently plays for the Minnesota Whitecaps and owns/operates her own hockey company, OS (Overspeed) Hockey. She is married, with 2 kids and lives in Roseville.

It was the night before the biggest game of my youth sports hockey career, and I couldn’t sleep.

I didn’t want to let my teammates down. My mind was racing

Self-doubt entered my mind. Society told me I should be a figure skater, instead of a hockey player (which I did compete in). 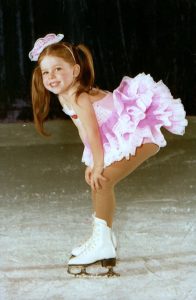 But, I loved hockey. And, the only place for a girl, like me, to play hockey, at that time, was on a boy’s team.

I was a great skater. I was small, but I skated like the wind. My experience with figure skating helped me with that. I knew my edges well, and I could skate backwards just like I skated forwards. When I got to the squirt level, my skating was significantly better than the boys. 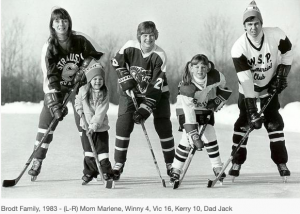 Then it happened. The boys grew.

Peewee wasn’t so bad. At that age, there were a group of boys who hit their growth spurt and some that hadn’t yet. I still could hold my own; however, at this point in hockey, we started checking and the game got A LOT rougher. The boys I played against, who I was once flying around as a squirt, could slow me down. They sent me a message. They wanted to BLOW ME UP.

Then I got to Bantams, and every boy I was playing against was big. I was still a staggering  5’2”, 90-pound defensemen playing Bantam A hockey in Roseville. This was one of the top bantam hockey teams in the state. The playing field leveled out, and I wasn’t one of the best on the team anymore; however, I could still hold my own. The physicality of the game made me a heads up player, which is how I played hockey from then on. I had to be 100 percent for every game. It was survival mode for me.  I was a girl playing with boys, who were turning into men, and it could be really scary at times.

We were playing in the playoffs against the number one team in the state: Bloomington-Jefferson. At this time, that team was stacked with future Division 1 players, NHLers and Stanley Cup Champions.  Everybody knew they had a special team. My future options were to play college soccer or golf, because there was no women’s hockey in the Midwest.

My mind was racing the night before the game, but my nerves didn’t really kick in until I got to the West St.Paul Ice Arena.

“This is a big deal. Everyone is going to be watching, and all my friends from school are coming. The rink is going to be packed,” I thought to myself. “This could be the last time I am going to play with this group of guys before we leave high school.”

I needed to be ready to play. Our coach Denny Malarkey believed in running us out no matter what. He believed in equal play, which was awesome. I still believe this is how youth sports should be.  The bigger the game, it didn’t matter, we all got to play.

As I got ready, I noticed my mouth was dry.  Anybody that has performed knows the feeling I am talking about. You are in the fight or flight mode, and all the blood in your body is rushing to the center.  I looked around the room, and I saw all the guys I had played with for eight years. That was a surreal moment for me because I had the greatest teammates. They believed in me, and they encouraged me. I was one of the guys.  For the only girl playing boys hockey, that was extremely important.

I couldn’t wait to get onto the ice. I knew that once I skated a bit, I would be ok. It might sound weird now, but I found peace in knowing that I had five other people to help me out. I wasn’t out there alone like figure skating or golf.

Playing the game was easy. Well, not easy with the opposing team targeting me on the ice, but once the game started, I was able to block it out. That is the good thing about hockey. It is so fast that I could just focus on what I needed to do to be successful. I knew my role: Stop the offense and break the puck out. When I did that for the first time, I wasn’t nervous anymore.

You can’t always get the outcome you want. I went on to play one year of JV hockey on the boys’ team. After that, our high school started a girls’ hockey team, and I was honored to be a part of the first one. We were fortunate to win a state tournament while I was there.

Going through situations that brought out fear or self-doubt helped me deal with other pressures throughout my career. I wouldn’t change a thing about it. Well, maybe just the outcome of that Bloomington game.

I might have brought the fear on myself.  Being a girl, I didn’t want everybody to say, “The girl lost the game for the boys.” And, because of that, I worked extra hard. The same thing that you fear also can be the same thing that pushes you to get better.  Yes, I had that self-doubt but it drove me to work harder and be prepared for every game I played.

You can read more stories by clicking the story tab above.